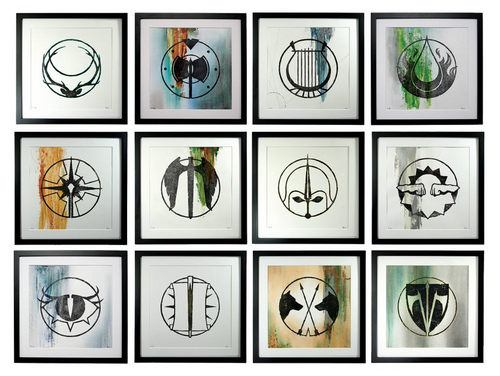 Included in Tony Cavalline's "A Map & A Key" exhibition is a series of monoprints titled Adventure - a system of sigils based on fantastical archetypes of magic, battle, and lore. Made in the style of an ancient seal or crest, with weathered edges and nicked sides, Cavalline's twelve designs are symbols of identity. Maybe when you look at them you see one that represents you? Are you a raging warrior, a roguish trickster, a sage of knowledge, a hunter of the forest? Monoprints are distinct from traditional printmaking because even though they are printed from the same block, each one is intentionally made to be one-of-a-kind. This can be through changing what kind of ink you are using, painting or drawing on the paper before you print, or adding details after printing (Cavalline uses all of these methods). As with traditional prints, monoprints can still be made in an edition, but they’re often labeled with something like “VE” to show that the edition is “variable” - each one is at least slightly different. You'll see this kind of numbering on Cavalline's monoprints.
×

Tony Cavalline: Then There was No End of Possibilities

Tony Cavalline: Something that I Used to Know

Tony Cavalline: It Isn't Really Anywhere, It's Somewhere Else Instead

Tony Cavalline: The Desperate Feel of the Last Warm Night of Summer

Tony Cavalline: As If the World Has Been Put Back Together Just a Bit