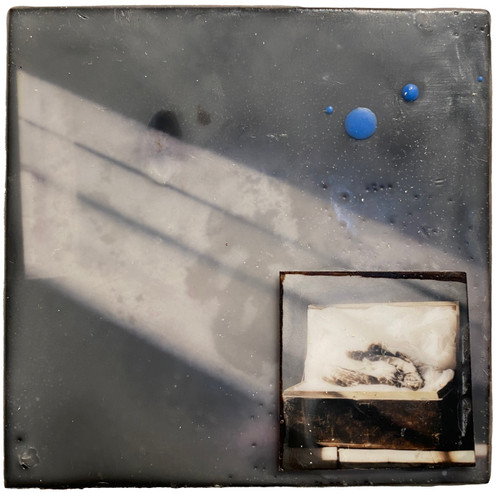 Tobia Makover is a fine art photographer and mixed media artist whose artwork creates intrigue through timeless and emotive imagery. In all bodies of her work and in life, Makover contemplates the physicality of our existence. She questions the importance of our being and the impact of our time here while examining the tension between holding on and the desire to let go. Makover's artwork is shot on film with a Hasselblad camera. She prints and adheres her photos onto cradled wood panels and then layers her imagery with wax and resin that she paints, carves, torches and then preserves through an encaustic process that dates back to the 1st Century, BCE. Real insect wings and other found objects are also encased in wax. IMAGO Empowered by a friend leaving an incredibly violent abusive situation. I reflect. Imposing damning secrets on a young child's ears. Silence. Golden boys getting away with incest. Silence. Alcoholic stepfather's disgusting caresses. Still, silence. The oppressive weight of secrets. Carried for decades. Baggage that was not mine but became so. The load of these burdens. The weight of the male gaze, the backward whistle, “Enjoy it now," she says, “It will not last.” Silence no more. I scream for them, for me. Ripping off the blindfold, we see and are seen. Now. Look. I dare you. * Oxford Dictionary defines imago as: 1. the final and fully developed adult stage of an insect, typically winged (from entomology); and 2. an unconscious idealized mental image of someone, especially a parent, which influences a person's behavior (from psychoanalysis).
×

Daria Sandburg: A Beating Charm for My Erratic Heart